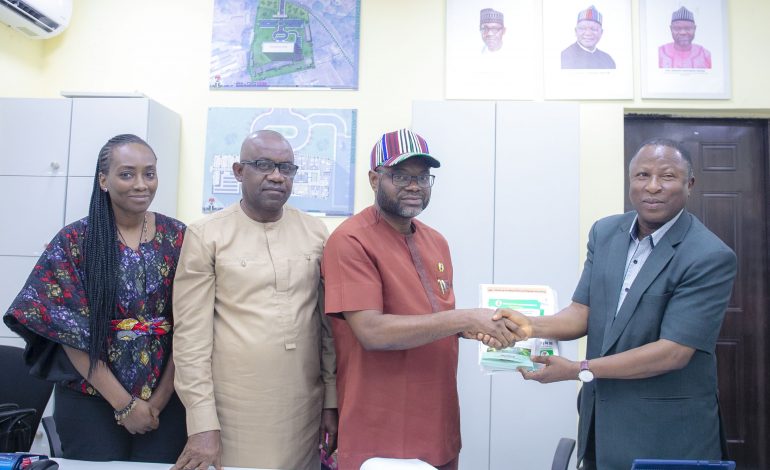 Posted in News, Notice Posted on August 16, 2021 by Stanley Igyuh

The sensitization team, led by the Director General of Nigeria Institute of Mining and Geosciences (NIMG) Professor Bolaji Hassan began its campaign with a visit to the state commissioner for Lands, Survey and Solid Minerals, Mr. Bernard Unenge.

In his speech during the visit, Prof. Bolaji introduced members of the delegation and goes further to state that, the ministry will be embarking on an airborne geophysical survey to prospect and ascertain the mineral deposits in the state, and the exercise will require flying airplanes across the 23 Local Government Areas in the state.

‘Its very important to note that, the exercise is not just being carried out across selected states in Nigeria, but to emphasis that Benue State is the only state fully covered in the exercise and this attest to the fact that it is endowed with so many minerals, Bolaji added.

In his remarks, the Honorable commissioner, Mr Bernard Unenge expressed excitement towards the initiative , stating that the governor is very much concerned about the economic development of the state, not just in its minerals but also in maximizing the opportunities that are available to boost the state economic and provide jobs for its teeming youth, as a strategy to get them fully engaged in productive ventures that will make them shun violence.

The Meeting continued with a town hall meeting with Local Government Chairmen and other relevant stakeholders in attendance, the DG NIMG reiterated federal government’s quest in ensuring that solid minerals will benefit all states down to the local level and there was need for synergy and collaboration between all stakeholders to ensure that the objectives of the sensitization is achieved.

MinDiver Calls for Bid Submissions for the Engagement of……