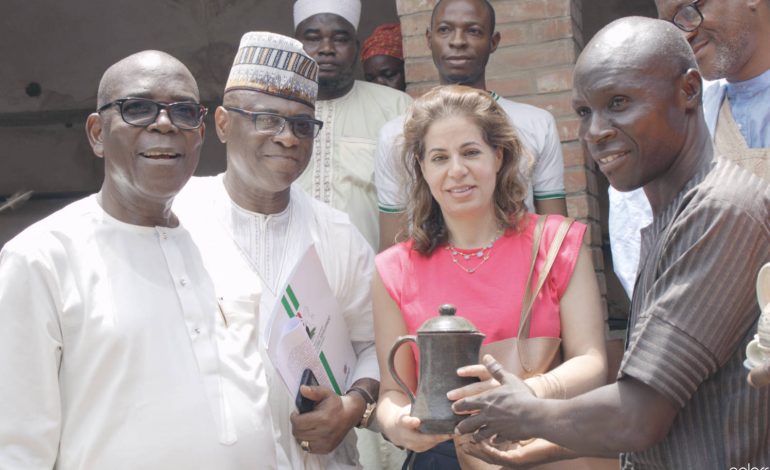 Posted in Notice Posted on April 28, 2019 by Stanley Igyuh

After over 20 years of neglect, the Federal Government on Saturday promised to revive the Ladi Kwali Pottery Training Centre in Suleja, Niger.

Alhaji Abubakar Bwari, Minister of Mines and Steel Development, made the promise when a delegation from the World Bank visit the centre.

Bwari, who was represented by Mr Imeh Ekrikpo, Director, Steel Department of the ministry said the ministry would collaborate with the World Bank to revive the abandoned training centre.

The minister said the rehabilitation of the abandoned training centre would be in collaboration with the World Bank Assisted Mineral Sector Support for Economic Diversification (MinDiver).

According to him, the Federal Government will upgrade the centre to meet the demands of contemporary modern pottery production, which is expected to harness the abundant mineral resources requirements available in the industry.

“The genuine desire of the present administration is to restore the golden pottery era leveraging on the abundant industrial mineral endowments of the state.

“The cardinal interest of the federal government is to see that its diversification efforts manifest in improved livelihood of Nigerians through creation of sustainable employment and wealth creation for all Nigerians.

“As we gear towards restoration of the golden pottery era, it is important to recall that pottery was one of the oldest and thriving traditional crafts in Nigeria dating back to 3000 BC based on archeological findings.

“It will not be erroneous to state that Suleja in the early 1950s was a notable destination for the pottery industry in Nigeria and Africa’’, he said.

In 1951, a famous British studio potter, Michael Cardew, was employed by the Federal Government as a pottery officer in the department of commerce and industry, he identified the unique qualities and exceptional potential of Abuja pottery.

Cardew selected the area (Abuja) for the establishment of pottery training centre; the old Abuja, which was named as Suleja following the creation of new Federal Capital Territory, is now the modern day Niger.

Cardew’s exploits (founder of the centre), Ladi Dosei Kwali, Lami Toto, Kande Ushafa among others created a vibrant industry with numerous employees as well as its eminence as a tourist destination.

Bwari regretted that the notable centre and its training facilities were allowed to decay by successive governments.

“The centre is expected to engage the ever rising number of youths meaningfully through value addition processes of the industry and generate wealth for the nation.

“The centre will add value to our mineral resources like Kaolin, Quartz, Manganese, Tin, Dolomite, Talc among others to service the country’s market, generate employment, update native craftsmanship to compete with global eco-system and foreign exchange.

Mr Linus Adie, the Project Coordinator, Mindiver, said that the ministry had a vision to revive the centre through Mindiver.

He called for the collaboration of the state and its local governments towards restoring the golden era of the centre to take its place in the economic diversification programme of the country.

He also urged the youths to emulate the lifestyle of Ladi Kwali who never had formal education, but was a successful potter during her life time.

News Agency of Nigeria (NAN) reports that the Nigerian N20 note is adorned with the picture of the famous potter Ladi Kwali and her works to showcase the importance Nigeria attaches to her exploits.

Kwali’s exploits through the centre earned her both local and international recognition with the British Government decorating her as Member of the British Empire in 1962.

In 1979 the Ahmadu Bello University (ABU), Zaria honoured her with an Honorary Doctorate Degree, the honour has been described as unprecedented for a women potter without formal education.

kwali gave lectures and demonstrations on her craft within the country and abroad.

Mr Levi Yakubu, the President Dajo Potter Limited, said his own achievement as a potter was due to the knowledge and training acquired from the centre.

Yakubu, who is also called master potter said he did his internship under the late kwali.

“The master porter that people called me can be traced to this centre. I competed with some Chinese potters and won them at different competitions and I have also won several awards.

Ms Nura Arfaa, the Team Leader, World Bank said her visit to the centre was to ascertain areas where the bank could assist in revamping it, saying that the centre would soon have a facelift.

His Royal Highness, Alhaji Muhammad Ibrahim, the Emir of Zazzau, Suleja, who received the delegation said his emirate would support and ensure the resuscitation of the centre.

Ibrahim who was represented by Alhaji Rabiu Ishiaq, Galadimawa, Zazzau, Suleja said the resuscitation of the centre would create employment and add social and economy values to the state and the nation.

MinDiver Calls for Bid Submissions for the Engagement of……

President reiterates Commitment to Combat Illegal Mining Activities, Expresses Concern Over Loss of $3b to Smuggling of Gold